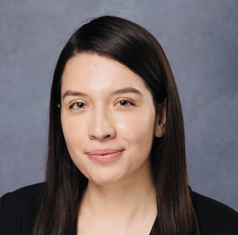 Stephanie was born and raised in Chicago, IL. She completed her B.A. in Creative Writing and Spanish in 2016 at Knox College, a liberal arts college in the close-knit town of Galesburg, IL.

Following graduation, Stephanie went back to Chicago and interned at a local children’s film organization where she worked alongside other interns creating the film synopses for the annual film festival’s pamphlets. After, she began to work at an immigration law firm as a paralegal. There she drafted case cover letters and interpreted for Spanish speaking clients during immigration interviews. Though very keen on bettering her Spanish language skills, Stephanie maintained her passion for writing doing some freelance copywriting on the side.

In 2018, Stephanie moved to Houston, TX, and began doing Spanish interpreting full-time at a call center. She began working at Internet LAVA in 2019, joining the content strategist team. During this time, Stephanie has broadened her knowledge of marketing strategy and expanded on her legal researching skills. In her free time, Stephanie is a part-time traveler, film lover, and cat mom to her beloved kitten, Mago.